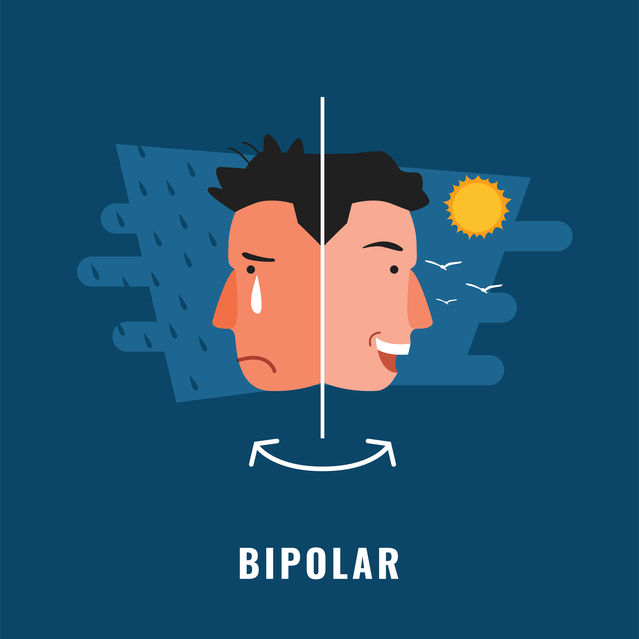 A discussion of signs, symptoms, and treatments

You just failed a big test and are pretty bummed about it. Or, you’re going through a bad breakup and feeling pretty down. We’ve all been there. In day-to-day life, everyone experiences ups and downs every now and then. Eventually, time passes on and our mood becomes better and we become “ourselves” again. Unlike the normal population, individuals living with bipolar disorder cycle through extreme mood swings that cause disruption to daily life.

You just failed a big test and are pretty bummed about it. Or, you’re going through a bad breakup and feeling pretty down. We’ve all been there. In day-to-day life, everyone experiences ups and downs every now and then. Eventually, time passes on and our mood becomes better and we become “ourselves” again. Unlike the normal population, individuals living with bipolar disorder cycle through extreme mood swings that cause disruption to daily life.

Bipolar Disorder. Manic Depression. Bipolar Affective Disorder. All three terms are synonymous with each other and the name of a mental health disorder affecting approximately 3% of the American population.1

The classic symptoms of bipolar disorder are the periodic changes in mood, alternating between periods of elevated mood (mania or hypomania) and periods of depression. If you are living with bipolar disorder, you may feel energetic, abnormally happy, and make reckless or impulsive decisions during manic states. During depressive states, you may feel the overwhelming urge to cry, experience feelings of hopelessness, and have a negative outlook on life. Hypomania is a less severe form of mania, where you generally feel pretty good–with a better sense of well-being and productivity.

With bipolar disorder, you don’t just feel “down in the dumps;” your depressive state may lead to suicidal thoughts that change over to feelings of euphoria and endless energy. These extreme mood swings can occur more frequently — such as every week. Or, show up more sporadically — maybe just twice a year.  There is also no defined pattern to the mood swings. One does not always occur before the other — and the length of time you are in one state or the other varies as well. The good news is that there are a number of treatments that can keep your moods in check and allow you to live a productive life.

Rates of bipolar disorder in men and women are about equal and the typical onset of symptoms occur around 25 years of age.2 There are many types of bipolar disorder; three of the most common include Bipolar I Disorder, Bipolar II Disorder, and Cyclothymic Disorder. Bipolar I Disorder is characterized by the occurrence of at least one manic episode, preceded or followed by a hypomanic or major depressive episode. Manic episodes may be so severe they significantly disrupt your daily functioning or may trigger a break from reality (psychosis). If you are suffering from Bipolar I Disorder, you may require hospitalization.

Signs and Symptoms of Bipolar Disorder

If you have been diagnosed as suffering from bipolar disorder, you may experience any of the signs and symptoms during a manic period:

Manic behaviors interfere with functioning at school or work, in social situations, and in relationships. These behaviors occur on their own — they do not occur due to alcohol or drug use, a medical illness, or a side effect of a medication.

The depressive side of bipolar disorder is characterized by a major depressive episode resulting in a depressed mood or loss of interest or pleasure in life. If you are living with bipolar disorder, during depressive states, you may experience some of the following signs and symptoms:

Depressive behaviors can interfere with school or work, family or personal relationships, and social functioning. If you are suffering from bipolar disorder and undergoing a depressive episode, it is not the result of substance abuse, medications, an underlying medical condition, or stressful situation – such as grieving the loss of a loved one.

What Causes Bipolar and How is it Diagnosed?

Environmental factors also have shown a connection to bipolar disorder – and they likely interact with genetic predispositions to catapult the onset of the disorder. What this means is that if you are living with bipolar disorder, it was probably a mixture of genes and a life event that triggered the disorder to present itself in your everyday life. You may have suffered from some type of traumatic event or abuse or a troubling and/or stressful interpersonal relationship of some type.

If you believe you are experiencing signs and symptoms of mania or depression, go see your doctor. Oftentimes, it is your family or co-workers who are first to recognize signs and symptoms of bipolar disorder. If you are suffering from this condition, you may be reluctant to seek help at first – mostly because you are not able to notice how disruptive the disorder is to your life. And, you may enjoy feeling euphoric.

However, it is important to treat this condition so you can manage your emotional states and live a productive, full life. Bipolar disorder will not go away on its own and you are likely to live with this condition for the rest of your life. However, with the right treatment plan, you can live a good life.

What are the Treatment Options?

Medications and psychotherapy are the most commonly prescribed treatment plans for people suffering from bipolar disorder. And the success rate of these treatment plans is great if followed correctly and consistently.

Psychotherapy has also been an effective tool for people living with bipolar disorder. Cognitive behavioral therapy will help you learn how to change negative or harmful thoughts or behaviors. Family-focused therapies involve your family members and focus on teaching coping strategies, communication counseling, and problem-solving techniques.

Psychoeducation has also been a powerful therapy tool to teach individuals living with bipolar disorder about their condition and how to treat it. This education allows you to notice trigger points and impending mood swings so you can seek treatment before a full-blown episode occurs. Interpersonal and social rhythm therapy (IPSRT) is used often in treating bipolar disorder as well – as this form of psychotherapy focuses on the stabilization of daily rhythms — sleep, wake, mealtimes — to introduce consistent routines to better manage moods.

Due to challenging side effects including insomnia, tremors, and weight gain, many people living with bipolar disorder aren’t helped by the current medication options. The good news is researchers continue to investigate new treatment modalities including the potential of drugs used for Lou Gehrig’s disease as well as drug used for breast cancer to treat bipolar. Transcranial magnetic stimulation is also being studied.

To learn more about ongoing research and for information about participating in a study, visit the Depression and Bipolar Support Alliance.3

In severe cases, you may need to be hospitalized for your own safety and well-being. This may result from severe states of mania or depression leading to psychosis, risky behaviors, or thoughts of suicide.

If you are living with bipolar depression, it is important to follow your treatment plan. Pay attention to warning signs or triggers — this can help you seek additional treatment, talk with your counselor or mental health provider, and prevent the onset of a full attack. Avoid drugs and alcohol, and take your medication as prescribed — even on days you feel fine. Following your treatment plan, educating yourself about your disorder, and engaging in prevention techniques will positively contribute to your overall well-being and life satisfaction.

What Is Posttraumatic Stress Disorder?

I assist you to find a way to cope with everyday life and challenges (traumatic experience or simply everyday life) that has led to hopelessness.

I am qualified to work with adults, children and teenagers. 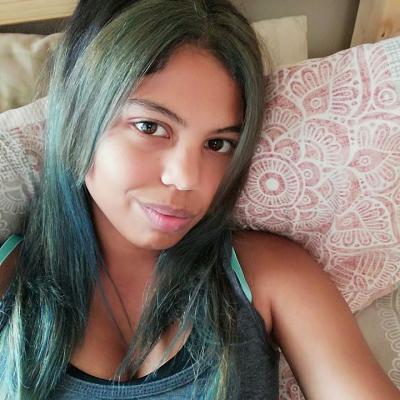 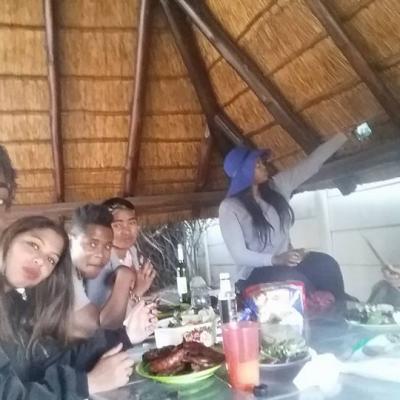 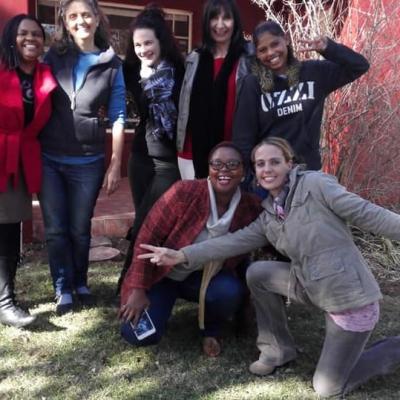 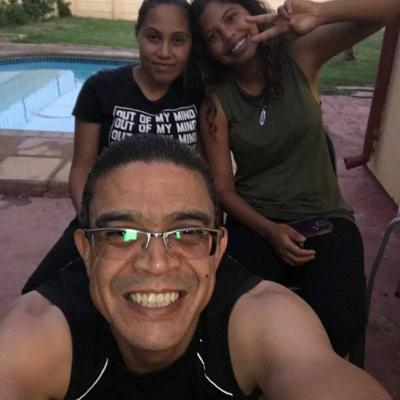 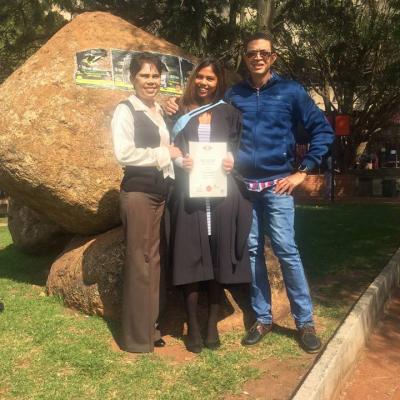